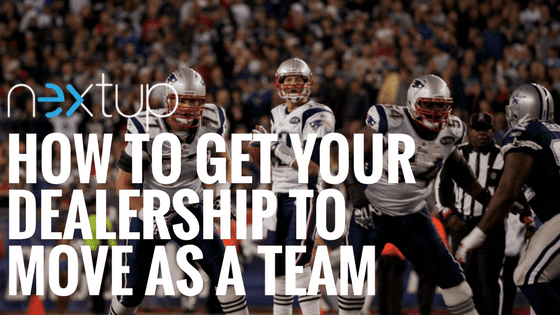 How to Get Your Dealership to Move as a Team

Director of First Impressions, Brent Wees takes a look at how business leaders need to “Be Like Bill” and how to get their dealerships to move as a team.

Just over a month ago the world watched the New England Patriots comeback from, what would be perceived as, an insurmountable deficit to win their 5th Super Bowl. A remarkable feat by any stretch in professional sports. Over the past 17 years, Coach Belichick has built the New England Patriots into the preverbal “well-oiled machine” with a regular season record of 201–71–0, a 25–9 record in the playoffs with New England, and 5–2 in Super Bowls.

Coach Belichick has created this culture of success by developing a true team system that does not rely on just a small handful of stars. Yes, he has, who some consider, the greatest quarterback ever to play the game, Tom Brady. But, it’s Belichick’s system which builds up all his players. Many of the Patriots best players weren’t even high draft picks coming out of college. Tom Brady was ignored until the Patriots drafted him in the second to last round of his draft.

Buying into the System

Every player who has ever donned a Patriots jersey during his tenure will talk about “buying into the system”. It has never been a system for “prima-donnas” or superstar additions. They have methodically put players together that fit their culture. Players who are open minded, willing to adapt and do anything for the success of the entire organization. John Brubaker was once quoted saying,

“Belichick knows that culture beats strategy every time. He knows it’s not the X’s and O’s that win championships. It’s the Jimmys and Joes. He also knows talent alone isn’t enough. At the highest levels, all players are talented. If they weren’t, they wouldn’t be there.”

Any business owner who has ever read anything on Coach Belichick’s success will tell you they’d want that for their own organization. I believe Dealer Principals would echo the same. However, many stores keep relying on 1 or 2 superstars to make them successful. Whether it be professional sports or business, when we rely on a superstar (or two) for our successes we will fall short. Sustained long term success is out of our reach because we would rather search for that one shining solution instead of making our entire team better.

If you think you can “Be Like Bill” or if you think your dealership can aspire to build long term, sustained success, let’s look at Coach Belichick’s pillars of success:

Belichick and his scouts look for players with a true passion for playing football, not for the lifestyle that comes with being an NFL football player. They dig deep in their interviews with players to fill their team with individuals they know will adopt to the right mindset they believe brings success.

Does your dealership staff have a passion for what they’re doing? It’s easy to put bodies on the floor and in the service bays but, passionate people make every customer’s visit to the dealership better.

Belichick’s system is not an easy one. Heck, most NFL coaches employ a very complicated playbook. So, it’s important that the Patriots organization find players that demonstrate a knack for the cerebral, not just the God-given skill of a premiere athlete.

Salespeople need to think on their feet, continually learn new systems and have a firm understanding of the laws of business enforced in their trade areas. Members of your dealership should show an eagerness to evolve their skills, and a hunger to learn when given the opportunity. Those who “know everything they need to know” will never evolve your business.

Historically, with the Patriots under Coach Belichick, if players are not performing up to what Belichick thinks should be their value, they are quickly traded to other teams or out and out released. The team never puts themselves at the mercy of any player. No one player controls their success. Coach Belichick’s strategy sends a message about the importance of the team’s culture to the entire roster.

Your dealership or sales team is not beholden to any one employee. Build a team that supports one another. Providing a culture that ensures all team members find success is far better than allowing one “superstar” to keep you in the middle of the pack.

Your dealership’s playbook should mirror Coach Belichick’s. Build a system for success, put the right team of like-minded individuals together and show them how to move as a team.

No one player is bigger than the organization, the dealership is the superstar.