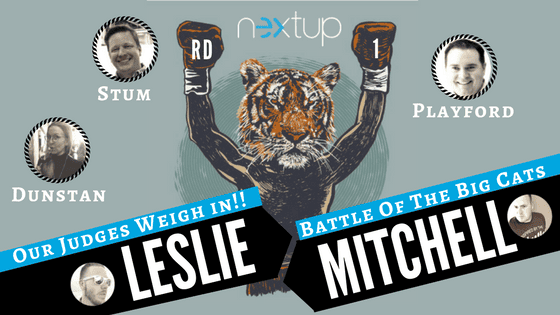 Battle Of The Big Cats – Round 1 Judging

Leslie and Mitchell both came out swinging in Round One of Battle of The Big Cats. The discussion of BDC value was well covered by both writers but with every prize fight, there needs to be scoring.

With this round in the books, it’s time for us to bring in our judges. After each round, we’ll look to them for their take on our writers’ efforts and score without bias. Jenn Dunstan, Marketing Director (FlexDealer), Jason Stum, Director of Strategy (Launch Digital) and finally Bill Playford, Vice President (DealerKnows) have taken up the task of ensuring this is a fair fight.

Here are their thoughts on Round One.

Jenn Dunstan (FlexDealer) – Which expectation is most realistic: a jack-of-all-trades staff that can balance a fluctuating monthly workload with the unexpected demand of answering prospective customers, or a seamlessly siloed hand-off of each prospect from salaried BDC staff member, to the commission salesperson? I believe the solution is somewhere in a collaboration of the two.

Salespeople are known for being naturally empathetic communicators, typically strong with their phone and in-person presence. In recent years, customer communication expanded to include the time-sensitive matter of written email and chat lead response. “Written” being the operative word.

In the same way, I can’t discredit your MBA for ordering a “double expresso” — we can’t assume that the lack of grammatical prowess is indicative of one’s potential as a salesperson.

Not all salespeople are wordsmiths. Not all customer service staff are extroverts.

Knowing your team and playing to their strengths will always be the most effective plan of action. And when those strengths are used in favor of the consumer experience, we can expect to garner the best results.

I give this round (by a thin margin) to Mitchell.

Jason Stum (Launch Digital) – And round one of Battle of the Big Cats is…..a DRAW!

To BDC or not to BDC is a question that ultimately has no right or wrong answer as there’s no one solution that can suit every dealership out there. I’ve been a part of an automotive group that runs efficient and effective BDC’s for all their stores, and I know of other dealers that are quite successful without the use of a BDC.

While Josh and Chris expertly laid out their opinions (kudos fellas!) about the usefulness (or lack thereof) of BDC’s, neither of them brought up the all important fact that ultimately whether you BDC or not, it all comes down to:

So without them laying out these critical conditions of success, I can’t give the round to either Josh or Chris. And mind you I’m not saying they’re wrong in their opinions or didn’t make persuasive arguments because they’re not and they did.

So for this round, let’s just say they’re equally right.

I love a spirited debate between two experts. Thanks to the lovely and talented folks at the NextUp, we get to see just that. Now, thanks to friends in high places, I’ve been asked to weigh-in.

My ten years of consulting with dealerships and vendors has taught me a few things. Location, brands offered, and lead volume all play a big role on how leads need to be distributed. Not every store needs a BDC, but every store needs someone who is dedicated to handling Internet leads. After working with the likes of AutoNation and Asbury, to tons of tiny stores you’ve never heard of, more than 500 Internet agents, and over 1,000 dealer personnel, I can unequivocally say there are two irrefutable truths: Both time and talent are limited resources.

Chris has some valid points in his argument. With the ubiquitous access to the Internet, and all the information it contains, it’s extremely hard to make the distinction between an “Internet customer” and a traditional one. I also totally agree that accountability, or the lack there of, does not reinforce the necessary behavior modifications that need to take place inside of retail dealerships. We could not possibly agree more that magicians wear cooler hats, especially compared to Brent Wees. But, Chris’ philosophy regarding the Internet dealership is a pipe dream which has not been realized in the 20 years since the Internet has become widely accessible.

Based on my experience, I’d have to support Josh’s view on the debate on logic alone. First and foremost, we are all bound by the 24 hours that exist in one day, making time the ultimate governor. I’ve worked with some exceptional A-Z Internet personnel over the years. I like to the think I was pretty damned good at it myself. But, the fact of the matter is that face-to-face communication can, and should, trump an Internet lead. Research has shown that the optimum response time is between 10 and 20 minutes, meaning the best A-Z Internet folks would have to juggle answering availability and pricing questions, setting appointments, meeting and greeting, walk arounds, appraisals, delivery, service drop-ins, etcetra ad finem. Someone can be outstanding at traditional or Internet, but can only hope to be mediocre at both. Time will simply prevent it.

There are always exceptions. There are some unicorns out there that can do both, and a good portion of them are probably skimming over this right now. If that’s you, ask yourself: Am I just like everyone else I work with? The answer is most likely, a resounding no. You probably work harder than nearly everyone else, have the highest CSI, and if you admitted it to yourself, pull other people’s dead weight all day long, just like the tiny fraction of people who are good at working with Internet customers. Working with staff in over 200 cities and towns across North America will demonstrate that most people inside of car and non-car dealerships, including managers, seem to be overwhelmed by their daily tasks. Proofreading emails and following CRM prompts to call customers prove to be too difficult on a consistent basis, even when being held accountable. We can’t base our opinion on the exceptions, and not the norm. The average dealership will lose more Internet opportunities than one with a dedicated Internet staff.

When deciding between having dedicated vs. non-dedicated Internet staff, a dealership must ask itself how many opportunities it’s comfortable with LOSING. To say that revenue cannot be tied to a BDC is like saying Phil Jackson didn’t win 11 of his NBA championships because he didn’t take a shot on the court. Before gambling on your dealerships non-traditional opportunities, realize that we’re all governed by the clock, and that an abundance of talented people can’t be pulled from the magicians hat.

Mitchell wins this round.

SEARCH:
RECENT POSTS:
READ MORE:
Copyright The Next Solutions, Inc. 2020 - All Rights Reserved
Back To Top
×