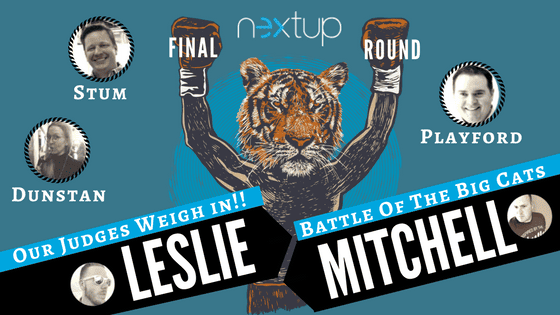 Battle Of The Big Cats – The Final Round Judging

This is it, ladies and gentlemen, Josh and Chris have battled it out all year long here on the blog and it’s time for the judges to weigh in one last time. While huge thanks go to the two combatants we also want to thank Jenn, Jason, and Bill for volunteering their own time to participate in this. Never to be short on words they have not only sided with one cat or the other but have added keen insight that made this exercise very rewarding. Without further adieu, the final round, judges over to you…

While I commend Chris for his historical references, I am not sure he’s debating the right question. Technology and work ethic are mutually exclusive. I’m with Team Josh on this.

The end of the commissioned salesperson will happen because fewer people will be interested in the risk versus reward structure that commission provides. Countless studies have concluded that the generation that makes up the majority of the workforce since 2015 (hint: it’s not Generation X or Baby Boomers) have different motivations than previous generations. When those who make up this generation choose to make 50% of the money they’d make working at a dealership to sling cappuccinos all day should tell us something. We can pray for more Boomers and Xers to be born, but short of a time machine, that’s impossible.

The commissioned salesman is literally dying off, most likely never to be replaced. Sorry if that hurts people’s feelings, but I’m a move forward kind of person. If dealerships don’t face the facts and adapt their workplaces to accommodate new cultural norms, then they have no hope of attracting even marginal talent. Instead, they will be investing resources into training people for their next job.

I will ask you the same question I asked back in August of 2015: What happens when they disappear?

I find it amusing how hard it is to avoid discussing the macro level view when it comes to these hot-button issues. It’s never as simple as choosing commissioned pay or not—because there are many other factors that will cause the best-intentioned compensation structure to fail.

As Chris insists, it’s not an antiquated pay structure that’s solely affecting our bottom line, and it’s not the evolution of technology that decides whether commissioned sales is antiquated in the first place. Dealerships are essentially retail facilities, shilling goods and services in an increasingly competitive market. (Increasingly competitive because of consumer expectations—not due to the volume or skill of one’s local competition.)

If we’re truly committed to doing business in an industry that hinges on customer experience, then the recruitment and leadership of your front-line can make or break your business. We need to operate believing ‘Customer First.’ Josh draws uncomfortable attention to the outdated method of dangling the carrot of a six-figure salary. If your salesperson’s only goal is personal wealth, they will make business decisions (on your behalf) to achieve that goal. The more a salary relies on an individual’s performance, the more self-serving their performance will become.

‘Customer First’ demands superior product expertise, a structured lead handling process, and a management team that is fuelled by the company’s core values. Chris is right. It’s not the pay structure’s fault, per se. But I’m handing this point to Josh: if our sales team is constantly operating in financial survival mode—their dealership’s best interests will take a back seat.

I won’t lie, it took me way longer to judge the final round of this epic blog battle than it should have. The topic up for debate, commissioned versus non-commissioned sales staff, sent my mind reeling in a thousand different directions.

So as I tend to do when I judge these debates, I’m going to relate it to my personal experience.

Before I got into the car biz way back when I had cut my teeth in the sales game as a computer salesmen for two different big box retailers.

The first retailer I worked for only paid on an hourly basis. It didn’t matter how many computers I sold or how many peripherals and software packages I added to the shopping cart (a real one, mind you), I only got paid for the hours I was on the clock.

When I first started, that didn’t matter one bit to me. As far as I was concerned, I had the perfect job. I mean I got paid to talk about something I loved all day. ALL….DAY!

However that all changed one fateful evening when I overheard a conversation between two of my peers on the sales floor. It went something like this…

SLACKER ONE: “Omg did you see how hard Stum worked today? Running all over the place like a head with a chicken cut off…he’s so stupid.”

SLACKER TWO: “I know, right? He still hasn’t figured this gig out. Clock-in, do as little as possible, get paid. Repeat.”

It was then that I realized that while I was making a load of money for the store, I wasn’t being paid any differently than my slacker colleagues. They could go a whole shift and barely move a copy of Norton Antivirus, yet they still got paid the same as me.

After hearing that conversation, the seeds of dissent were planted in my head. At first, I was mad at my coworkers for not being as driven as I was. But then my anger shifted to the company itself for not properly compensating me for my hard work and my l33t $ales $killz. It didn’t take long for my bitterness to lead me to seek another more fulfilling opportunity.

In the end, I got a gig at another computer retailer who did have a commissioned based pay plan, and all was well in the world both professionally and financially.

Getting into the topic at hand, Josh suggests it’s time to for car dealers to consider moving toward a non-commissioned pay plan of a base salary plus unit bonus. While on the surface this sounds like a reasonable idea, I just don’t think it would solve Josh’s stated problems of “long hours, little to no training and yelling managers”.

Once this new structure was implemented, every single salesperson would become an instant math enthusiast and look at their prior year’s earnings making commission and apply the new non-commissioned plan to those numbers. If the new plan didn’t equal or surpass the old plan, you can bet there’d be a mutiny.

Not only that, I feel it could also lead to a situation much like the one I had described to open this piece. People showing up, doing the bare minimum and not much else.

So for the final round of this epic battle, I have to agree with Chris that what our industry needs are more highly skilled workers. In order to attract these kinds of people, you have to make it financially viable to them and a commission based pay plan is the key.

But it’s so much more than how we pay our people. Make no mistake, the aforementioned long hours, lack of training and yelling managers can be a deterrent to any person regardless of their skill or how they are paid.

So maybe the debate shouldn’t be how do we pay our sales teams. Maybe it should be how do we make our dealerships better places to work that actually encourages people to want to do their best day in and day out? In my opinion, the dealerships that figure this out first are the ones that will thrive in the rapidly evolving world of car sales.

After a full year of going toe-to-toe, the big cats kept it close all year. As all the judging was added up for 2017 we are proud to announce the BIG CAT for 2017 is CHRIS K. LESLIE with a 3 – 2 round count! Congrats Chris for bringing the heart of your battle paln to the mid rounds where they really counted. Congrats to Josh Mitchell as well for not going out quietly and keeing it close at the end.